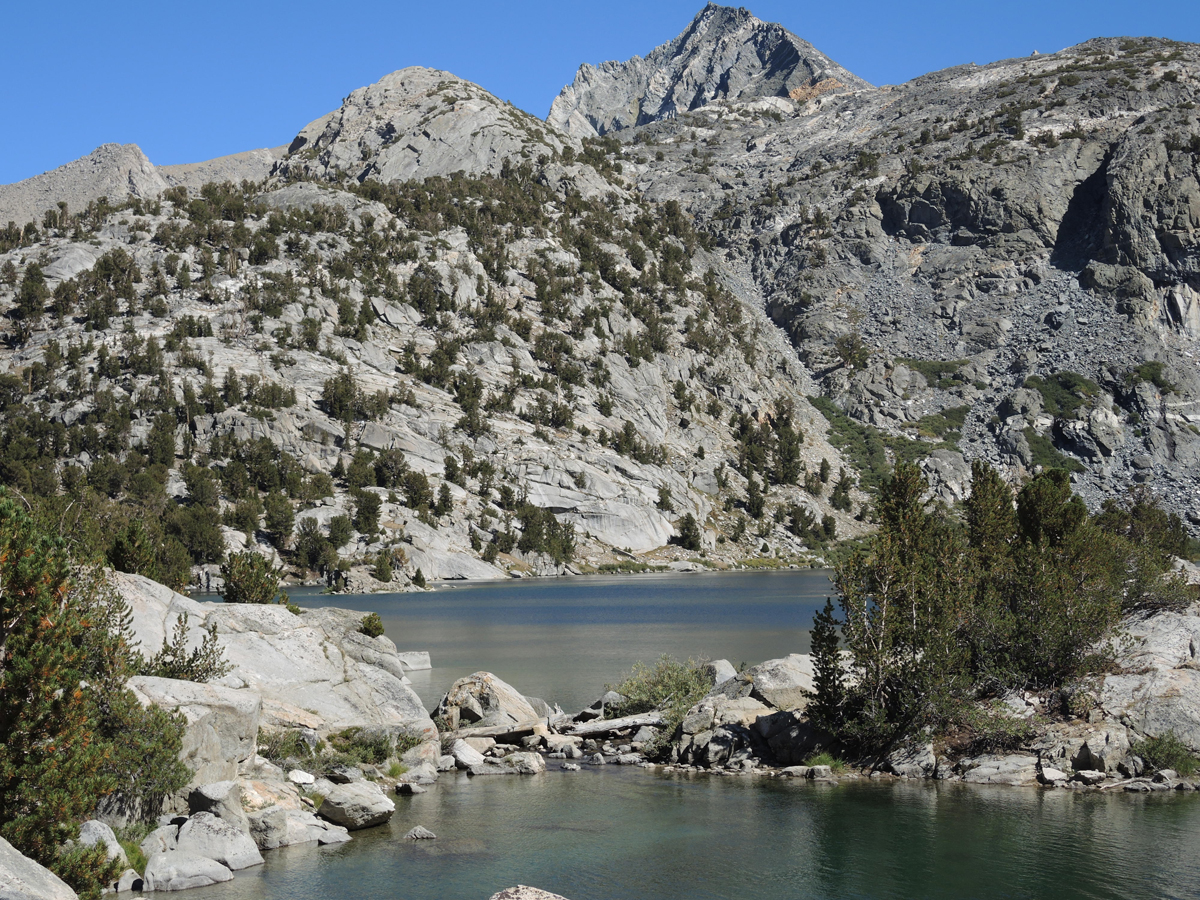 While everyone has a different opinion, one of the campsites which is on most all favorite lists is Rae Lakes. Rae Lakes is a series of three nearly connected lakes tucked in a glacial valley with Fin Dome bookmarking one end and Painted Lady the other end. The scenery is amazing, fishing is good, swimming is superb, and the camping is outstanding. Because of these attributes, Rae Lakes is a popular place, both for through hikers on the JMT or PCT and for weekend warriors coming in from Sawmill Pass or Kearsarge Pass.

Fortunately, the crowds are easy to avoid. Most backpackers are lazy by nature, and gravitate to the low hanging fruit of Middle Rae Lake, which even has bear boxes and a wilderness ranger station. Instead of joining this mini-city, hike around either of the lakes to the back side. Numerous obvious and hidden sites exist.

Two amazing campsites are on southern end of Middle Rae Lake. As the JMT winds around the lake, look for a scramble trail up slope towards the lake. A nice flat spot awaits you, with unobstructed views of the lake. The second is off the Sixty Lakes Basin Trail towards the lake. Again, perfect views with the bonus of a private swimming bay and beach.

Positives include proximity to the store, grill, showers, and restrooms. These are also the negatives, as there is no wilderness experience at all. The Backpackers Campground is crowded into a hillside with sporadically placed picnic tables and bear boxes. As a result, it is a noisy campsite.

The vast majority of JMT hikers make Guitar Lake their final campsite prior to ascending Mount Whitney and exiting at Whitney Portal. And there is good reason: beautiful lake, right off the trail. And just before summit climb begins. As a result, it can be crowded.

So, stop for a drink, and keep going, for there are two great options yet to come. As the trails rises above Guitar Lake, there are a series of tarns to the right, offering a handful of sandy campsites. Water availability is seasonal. If you are truly adventurous and want a head start on the summit rush, continue up, tackling the switchbacks. Prior to the final switchback, there are a few obvious sandy sites carved in the mountainside with room for one or two tents. Here you will find unobstructed views down Whitney Creek Canyon. No water, meaning you need to tank up at Guitar Lake with enough liquid to last the night, the summit ascent, and the descent to first water coming down from Trail Crest. But is well worth it! You can be on the trail early and on the summit for sunrise with an extra hour of sleep.

Muir Trail Ranch (MTR) is a hiker friendly resupply stop. MTR organizes an impressive hiker box, which is actually twenty buckets organized by product. They also provide a charging station for electronics,
water, and a very limited store. MTR does not provide hikers access to restrooms.

Most hikers pick up their resupply, and hike 400 yards to a cluster of campsites just off the JMT connector trail. These campsites have no ascetic positive, other than being in the middle of a wilderness area.

Instead, backpackers should pick their resupply, and head south 3-4 miles and grab a prime campsite off Piute Creek just inside Kings Canyon National Park.

The Campanista’s Guide to S’mores