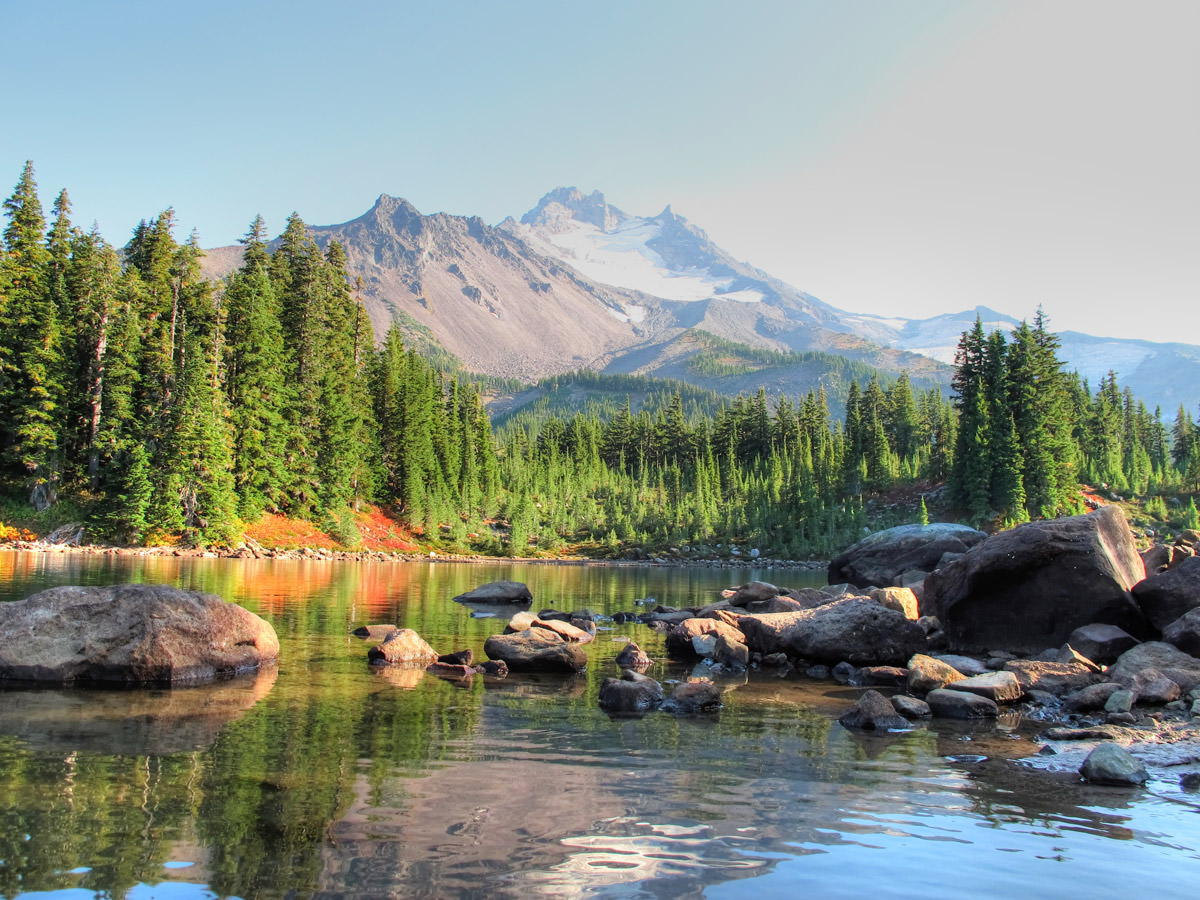 You have probably noticed quite a few photos of Mt. Jefferson on this website as of lately and there is a good reason for that.  Towards the end of this summer, in September to be exact, I went on a short overnight backpacking trip to the Jefferson Park Wilderness area.  The Jefferson Park Wilderness is a super popular day hike and overnight destination and is also a stopping point for through hikers on the Pacific Crest Trail.  The area is comprised of a large meadow that is surrounded by a dozen or so cascade lakes all sitting at the foot of Mt Jefferson.  The result is an absolutely gorgeous scenery ripe for an unlimited amount of photo ops.

Recently the US Forest Service announced a permitting plan for the Jefferson Park area that would allow visitors to make campsite reservations to would guarantee a spot for the night.  This approach is thought to help alleviate the stress of high crowds on the delicate ecosystem however it does not seem to limit the number of visitors to the area – only those who plan to camp overnight.  What’s more, the reservation system does not prohibit visitors from camping in campsites that are not near the lakes.  This only addresses the demand for lakeside campsites which is very odd as most of the visitors when we were there were day use visitors.  In any case, the announcement of the reservation system created a last minute scuffle of adventurists trying to get one last trip into the area before the  reservation system goes into place.

There are several ways to visit Jefferson Park ranging from a in and out day hike to an overnight backpacking trip.  We chose the overnight option as the idea of going to bed at the foot of a giant and waking up next to it seemed like a great idea. There are also a couple of different routes that can be chosen for the approach to Jefferson Park – one being more scenic but difficult and the other being easier with less to look at.  Naturally we chose the scenic route.

When taking the scenic route the adventure starts before you even step foot on the ground.  The trailhead begins at Breitenbush Lake near the Breitenbush Lake Campground which is fairly difficult to access due to a very rough forest road.  4×4 vehicles are not really needed however high clearance is a must.  The road in takes about 45 minutes and due to many large rocks is slow going. We saw several camry type vehicles simply parked on the side of the road and we assumed they gave up and hiked in the rest of the way.

Upon reaching Breitenbush lake we started hiking immediately on the Pacific Crest Trail.  The hike in takes you through a lush forest with occasional clearings allowing for magnificent views of Pyramid Butte and Mt. Hood.  The hike is a gradual ascent all the way up to a ridge that offers amazing views of Mt. Jefferson and Jefferson Park.  From here it was a steep descent into the park.

In Jefferson Park there are quite a few lakes including Russell Lake, Scout Lake, Bays Lake, Rock Lake and Park Lake.  To make things more confusing there are many smaller ponds surrounding these lakes and trails leading all over the place.  We quickly got lost and found ourselves walking off trail through a meadow until we found an actual trail.  After visiting several lakes and finding all the campsites to be taken we finally settled for an awesome spot at Scout Lake.  When camping in Jefferson Park it is illegal to camp in a non-designated spot within 250 feet of a body of water which is why all the sites were taken.  In addition the state was in extreme fire danger and campfires of any type were strictly prohibited.

Once we found our campsite we immediately began the ritualistically blissful process of boot removal.  Once the sensation returned to the feet tents were setup and camp was ready. We checked out the shores of Scout Lake next to our campsite and could see maybe 50 or so other hikers around the shore of the lake.  We were by no means experiencing the solitude we had hoped for however the amazing views of Mt. Jefferson instantly erased the annoyance of the crowds.

Thanks to the crowds we decided to do a little side hike and put our boots back on and headed straight for the base of Mt. Jefferson.  We hiked up maybe a couple hundred vertical feet and found meadow after meadow over each ride we scaled.  Truly a beautiful scene with streams running through them and the dogs going crazy chasing bugs and drinking mountain fresh water.

As nightfall approached the crowds of day hikers drastically died down and the alpenglow set the scene for an amazing evening.  Mt. Jefferson seemed to be lit up in a hue of gold just for us as darkness drew in.  The night was almost silent except for the sound of massive rockslides echoing loudly through the huge canyons on the mountain.  Morning was just as exceptional as the evening’s alpenglow with a crisp and fresh taste to the air and a crystal clear view of Mt. Jefferson.  Coffee was made, breakfast consumed and tents broken down.

The hike out of Jefferson Park is certainly the most brutal section of hiking on the whole trip.  It starts with a short hike through the meadow but then immediately ascends up to the top of the steep Park Ridge.  Once to the top of Park Ridge it is a long but quick descent to the car where we once again partook in the ritual of boot removal.

The overall experience of camping at Jefferson Park brought back memories of High Sierra adventure from my childhood and a longing to backpack more than I had been.  Its beauty was absolutely amazing and revitalizes the soul in a way that only a someone who has been there can understand.

Here are all the photos from the hike: